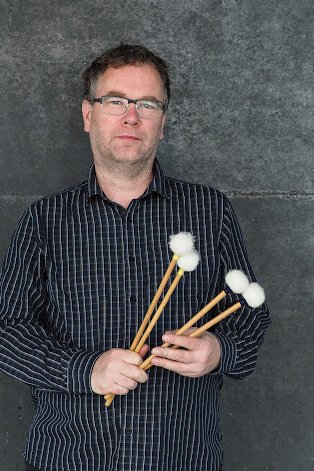 Frank Aarnink was born in Holland and moved to Iceland in 2001. He is currently a timpanist and percussionist in the Iceland Symphony Orchestra. He has played timpani with the Reykjavik Chamber Orchestra, including a tour to Russia with Vladimir Ashkenazy as well as playing with the Icelandic Opera, Caput Ensemble and more. In Holland he played timpani with the Rotterdam Philharmonic, the Radio Filharmonic, Symphony and Chamber Orchestras, the Metropole Orchestra, the Dutch Chamber Orchestra, and the Orchestras in Arnhem and Maastricht. He has also played percussionð in many orchestras including the Royal Concertgebouw Orchestra. Frank also performs a lot of baroque music. He has recorded all the Bach cantatas with the Holland Boys Choir. He has also played with the Freiburg Baroque Orchestra, the International Baroque Orchestra of Hallgrimskirkja, and the Gabrieli Consort and Players. In 2007, together with harpist Katie Buckley he formed Duo Harpverk. To date, they have commissioned over 150 pieces for percussion and harp. They have recorded 2 albums, The Greenhouse Sessions, and Offshoots. Katie and Frank also premiered Stewart Copeland’s Poltroons in Paradise, concerto for harp and percussion, with the Iceland Symphony Orchestra. Many composers write for Frank and they are intrigued by his vast collection of instruments.  He also is very versatile and performs on unusual instruments such as the cimbalom, the saw, theremin and a little Shamisen. In 2007 Frank was nominated for the “Musician of the Year” award at the Icelandic Music Awards. www.sinfonia.is www.duoharpverk.com